Look Up, Rise Up 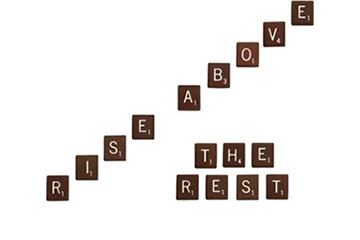 These are confusing and frustrating times.

We’ve seen separate worlds in the American culture collide with explosive force and devastating results. A simple act becomes a a spark for a movement that has revolutionized the way we think, speak and act in a world we’ve been a part of for years.   A single player makes a stand by remaining seated during pregame ceremonies as the national anthem plays. He later decides to kneel quietly - both acts in protest against police brutality and the oppression of people of color. His individual deed becomes a spark which galvanizes a political agenda when his “taking a knee” is reframed as an attack on the anthem, the flag, the United States and those who serve to protect it. This player could have chosen a number of ways to express his grievance, yet he chose to quietly and respectfully “take a knee.”  More than a year later, this player is unemployed, a hero or a villain (depending on who is asked) and is the recipient of the 2017 Sports Illustrated Muhammad Ali Legacy Award.

At the time of the initial protest the American people were already battle weary due to the relentlessly aggressive and contentious presidential campaign. The confusion, chaos, conflict and contempt for decorum disrupted our familiar, orderly world. The post-election atmosphere  added to the collective distress as disorganization and daily drama became the order of the day.  How did one of America’s most popular sports - a social outlet for many sports crazed Americans - become embroiled in this political firestorm?

The weather is not the only thing that has been subject to climate change. The climate among the American people become increasingly stormy over  the past year. According to the Pew Research Center gaps on several measures of political values – including attitudes about the social safety net, race and immigration – have increased dramatically between those of differing political affiliation. We see, hear and feel it. However, this seismic shift is not new, it’s merely grown deeper. It’s become clearer we are not the “United” states we once believed ourselves to be. As a nation and as individuals we have become more divisive.

What became of the highly regarded world leader that welcomed with open arms those from other lands?  At times it can feel like we have become “anti” everyone that does not look like us, live like us, worship like us or have money, education or privilege.  The simple act of “taking a knee” placed a glaring spotlight on one of these key divisions.  To supporters of this protest it appears as though a broad swath of US society has developed a high tolerance for oppression, extremism, harassment and even murder. While some buy into the idea that current approaches are “making American great again”, others wonder if we are instead being robbed of our beloved America by kleptocratic, hateful extremists. Have we been deluded by a media that reports fake news to fill political agendas? Have we been conquered in an electronic coup and become a pawn of Russia? America our home of the brave land of the free?

The reality is that America is still ‘’our America.’’ We just have to care enough to open our eyes to recognize it.  Asking the right questions will allow us to gain insight into why we feel stressed and overwhelmed. We must also ask the right questions to provide us answers to understand what we need to do in order to do better and ultimately feel  better. We may not be able to change all that we believe is wrong with America but we have the power and ability to change how we are affected by it.

We are currently being inundated with incessant information, becoming saturated with the sociopolitical battles we see and hear about on a daily basis. It’s affecting us in unhealthy ways. According to the recent Stress in America poll by the American Psychological Association, 59% of Americans feel that this is the lowest point that they can remember in US history.

To provide perspective, each of the surveyed groups has lived through one or more world changing event. The Gen Xers and Millenials lived through the September 11th terrorist attacks. Baby Boomers lived through this attacks and the Vietnam War, and senior adults lived through all of these plus World War II. The poll, which represented the demographics of the country, found that just 21% of Americans are satisfied with the direction the country is heading.*

These results provide insight into why many of us are experiencing an ever present anxiety and sense of uneasiness. This can be akin to the feeling you get when you are watching a movie and the music changes dramatically from a lulled background to a jolting crescendo; a familiar yet foreboding feeling surges to blanket you in nervous anticipation. You allow yourself to be drawn into the unfolding scene. Heart racing, you fear that something awful awaits as the scene unfolds. You resist the urge to look away, instead surrendering as you’re pulled deeper into the scene – both emotionally and behaviorally. And as simple as it sounds, just like watching a movie if the news coming our way becomes to much (or if you just don’t like it) – get up and change the channel, or turn the television(or laptop/tablet/phone) off altogether.

You have the power to make you and your world much better. Changing your perspective provides insight and therefore changes your understanding of your situation.  Try to view the world from the perspective of those with whom you disagree.  If you begin to look at things differently you may actually start to “see” things differently, and therefore come to different conclusions or make different decisions. Making different decisions changes your attitude. Changing your attitude changes your feelings. Changing your feelings changes your reactions. Changing your reactions changes your behavior. And changing your behavior changes your world. Get a grip, and get moving as you change the filters in your life that may be keeping the good things out. In this age of technology, we allow it to permeate multiple facets of our lives whether in work or leisure. Nearly one-fifth of Americans identify the use of technology as a very or somewhat significant source of stress.  Therefore, it makes sense to decrease your time using technology -  avoid using your devices during time spent with family/friends, do not use your phone at dinner, limit television time and disengage from social media for periods of time.

The most recent APA Stress in America Survey* highlight other common ways that uncertainty stresses us out, and provides recommendations on dealing with these challenges:

1 Be kind to yourself. Some people are better at dealing with uncertainties than others, so don’t beat yourself up if your tolerance for unpredictability is lower than a friend’s. Remind yourself that it might take time for the stressful situation to resolve, and be patient with yourself in the meantime.

2 Reflect on past successes. Chances are you’ve overcome stressful events in the past – and you survived! Give yourself credit. Reflect on what you did during that event that was helpful, and what you might like to do differently this time.

3 Develop new skills. When life is relatively calm, make a point to try things outside your comfort zone. From standing up to a difficult boss to trying a new sport, taking risks helps you develop confidence and skills that come in handy when life veers off course.

4 Limit exposure to news. When we’re stressed about something, it can be hard to look away. But compulsively checking the news only keeps you wound up. Try to limit your check-ins and avoid the news during vulnerable times of day, such as right before bedtime.

5 Avoid dwelling on things you can’t control. When uncertainty strikes, many people immediately imagine worst-case scenarios. Get out of the habit of ruminating on negative events.

6 Take your own advice. Ask yourself: If a friend came to me with this worry, what would I tell her? Imagining your situation from the outside can often provide perspective and fresh ideas.

7 Engage in self-care. Don’t let stress derail your healthy routines. Make efforts to eat well, exercise and get enough sleep. Many people find stress release in practices such as yoga and meditation.

8 Seek support from those you trust. Many people isolate themselves when they’re stressed or worried. But social support is important, so reach out to family and friends.

9 Control what you can. Focus on the things that are within your control, even if it’s as simple as weekly meal planning or laying out your clothes the night before a stressful day. Establish routines to give your days and weeks some comforting structure.

10 Ask for help. If you’re having trouble managing stress and coping with uncertainty on your own, ask for help. The American Psychological Association Help Center is a good place to start http://www.apa.org/helpcenter/index.aspx


Living the Dream and the Paradox of Success

He who rises up against obstacles and continues the race forward is the one who reaches the top.

The Toll Road to Glory

While those outside of the sport see only the idyllic, “living the dream” scenario, the reality for many is that achieving and living this dream comes with huge personal sacrifices.

Being the wife of a football coach can be challenging. But Sarah Taylor got to see firsthand how to handle the job by watching her mother, Karen Sherman.