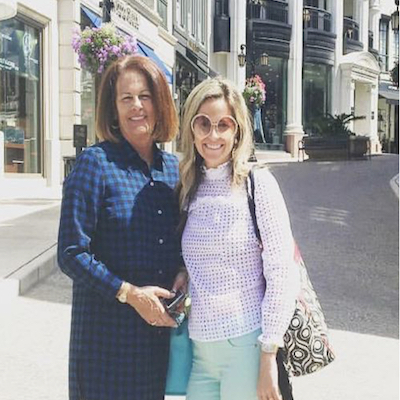 Being the wife of a football coach can be challenging. But Sarah Taylor got see firsthand how to handle the job by watching her mother, Karen Sherman, who has been married to her husband and coach, Mike, for 35 years. Mike was a Head Coach in college and the NFL for 31 years. Due to the uncertainty and inconsistency of the job, Karen and Mike have moved 13 times and owned 11 houses.

Sarah is the oldest of five children, and lived in six different states before she graduated high school. The hardest part for Sarah was the excruciating task of making new friends and dealing with those awful “mean girls”. For Karen, she found it challenging to constantly uproot her children and have them essentially start new lives.

“I do believe that it forced me to be an outgoing person. I had to adjust and make it work and it was always hard to start, but I always found my way and made friends,” Sarah said.

“I think because of moving, my kids have grown up to be independent and friendly people. I know now though that they sacrificed a lot in the name of football,” conveyed Karen.

Sarah met her husband, Zac, while attending a master’s program at the University of Nebraska. As part of the program, Sarah also worked as a graduate assistant in sports information, so she was involved in school athletics. Zac Taylor was the quarterback of the football team and his humble and kind nature stood out to Sarah. They started dating and were eventually married in 2008. Zac decided to also pursue the coaching profession, giving the mother and daughter another common bond. Karen has always been supportive of Sarah’s spousal choice, saying, “I am happy Sarah found a wonderful man to marry. Although, I might have chosen a doctor!”

Sarah’s father, Mike, was the head coach of Texas A&M University shortly after Sarah and Zach were married. Mike broke his own rule of not hiring family and gave Zac a job as a graduate assistant coach. They coached together at A&M for four years before both moving on to the Miami Dolphins. Mike stayed only one year with Miami as the Offensive Coordinator, while Zac coached the Dolphins for three seasons as Quarterbacks Coach.

“Zac and Mike worked well together, although I am glad now that Zac has begun his own journey”, expressed Karen.

While Sarah agrees with her mother that the men worked well together, she has a slightly different opinion about the unique family situation.

“In retrospect, I am not sure I would do that again. It was a great opportunity for my husband at the time that he couldn't pass up and I am thankful to my dad for a allowing him to work there because he has a strict rule about hiring family and it's for a reason, it doesn't always work out! Luckily, they did work very well together. But during those 4 years at Texas A&M, we were honestly probably too intertwined.  It was a bit of a relief when it ended and we could all be a bit more normal. That being said though, my husband learned so much from my dad. I was so proud of my dad and how hard he worked and liked that my husband got to see that, and I got to live by my mom. So, there were good parts and bad!”

Sarah says that she has noticed changes in the NFL from her childhood to now, but adds that when it comes to coaching positions, “it was ruthless then and it still is”. Her father coached the Green Bay Packers for six years and was fired right after his only losing season. She finds it ridiculous that coaches will be fired after only two or three seasons, which seems to be the current norm.

Karen shares the same perspective, saying, “I think the industry has changed for the worse. Coaches get fired way too easily now-a-days, which puts added stress on the families.”

Sarah has learned from experience that it can take a full season to change the culture of the team. With additional obligations like free agency and the draft, she believes every coach deserves at least four years to establish their own system.

Sarah and her mom, Karen, are incredibly close. Sarah grew up admiring her mom, who juggled raising five kids while being a doting wife to her coaching husband. She indicated this adoration by saying,  “I always think of how she remained calm in tough times, no matter my dad’s role. Whether is was a position coach or head coach, she was the same. She always made sure to have a life and friends outside of football and always took us to church. I have so much respect for her and how she lived her life in such a stressful environment and I ask her questions constantly.”

Sarah tries to follow in her mother’s footsteps when she approaches certain aspects of her life. That’s exactly what Karen had in mind as she raised her daughter to be independent, and tried to show her how important it is to build her own life outside of football by having a job, attending church and having different friends.

“It’s important to have your own identity that isn’t associated with football. This might be my biggest regret for myself. I wish I had taken the time to work outside the home and develop other interests. We were just too busy moving!” Karen said.

Sarah, Zac and their three children just recently moved again to Los Angeles where Zac will be working for the Rams this coming season. The family was previously in Cincinnati, and Sarah was heartbroken to leave the friends and community she had there. But she understands their reality, and says she has been very lucky at the warm welcome she has always felt when they join a new organization. “Coaches wives are a special breed and everywhere I have ever been I meet a new crew of amazing ones.”

While it might just come naturally to her now, Sarah most likely picked up her resilience to pick up and move on from her mom. Karen always strived to set an example for her children and others by showing them how she rose to the challenge of moving by making friends and staying positive through the ups and downs of being part of a coaching family.

Sarah would advise other wives of children of coaches to try to the enjoy every day focusing on the positive. There will always be people who offer advice as to how a coach can do better. She says to smile through it and be thankful.

“I always try to remember that when I get bitter or we are facing a heavy loss season, I think that there are a lot of young guys who would kill to have had the jobs my husband has had and he works really hard to get where he is. The highs are high and the lows are low, but if you remain strong in your faith and keep God and family #1 in your life, it is incredible how this profession can bless you.”


Control What You Can - Opt Out

It was so easy to see it, but we didn't imagine what it would take to achieve it.  If we did, it wouldn't be a dream.