I am a Sports Spouse 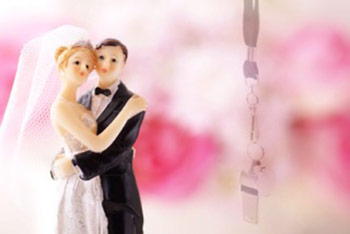 How is it possible that I married a coach? I never enjoyed competition and didn't play a lick of sports growing up, yet I am a Sports Spouse (SS). What? It’s simple, a person whose spouse earns a living either playing or coaching a sport. My spouse happens to be a football coach. I didn't watch a stitch of football growing up, so I didn’t understand what all the fuss was about either. So when I first met my husband and he explained he was a football coach, I responded, “Oh, nice--but what is your real job?” Yes, I was that person-- the one who thought being a coach couldn’t be a “real” job since they only play about 10 to 12 games a year. Luckily, he was able to see past my naiveté and proposed to me six months later. I understand now that he was a great recruiter and I did indeed sign on the dotted line. Now it’s 23 years married, two children and one dog later. Oh, and seven moves. We currently call Philadelphia home and the Eagles our team.

As a Sports Spouse I fully grasp that our livelihood depends on winning games. When you break it down like that, to one little sentence, it seems so simple. Of course there are plenty of times that are incredibly exciting, thrilling and may even seem storybook like. But those who live in this world know the other side. Those other times are the ones we would all rather forget. They can be heartbreaking, challenging and often times end with a potential move.

“Moving” is a word we don’t really say in our home. Sort of like how the Harry Potter book series references a very bad character as "He-Who-Must-Not-Be-Named!" Just the mention of that six letter word in our home might bring about a zip code change. There are two very different types of moves as my heart feels it. There is the “Firing Move”--where the press and public celebrate your exit. Or the “Movin’ on Up Move.”-- where the press and public are angry that you are leaving them for “greener pastures.” Though both are very different, the end results are pretty much the same. We must ready, stage and sell our home while finding and buying a new home in the proper school district within an acceptable commuting distance from the new office. There are tearful goodbyes to school communities, kid’s teammates, friends, neighbors, doctors and even the local vet. Let’s also not forget usually adjusting to a climate and culture change which inevitably ends with a wardrobe and color scheme change as well.

Yet, as much as this Sports Spouse dislikes moving, it has also brought so much joy to my family's lives and I am not even referring to the winning part. I am referencing all the wonderful people that we have met along the way. Many of them were neighbors, while others were just ordinary townspeople. But when I think about all the fellow “SS” I have had the utmost pleasure of meeting along our path it just blows my mind. These people are the strongest, kindest, most helpful and understanding people around. We share a common bond, a purpose and lifestyle. One that most don’t understand—just as I didn’t back in my younger days.

So THAT-THING-THAT-SHALL-NOT-BE-NAMED is actually the reason our family is surrounded, not literally of course, by such dear and true friends today. Without being a SS, we would not have met a single one of them, and the thought of that makes me so, so sad. I recall being very jealous when I would go back home to visit and see my friends living out their lives there. They knew all the best places to eat as well as all the
shortcuts around town. They had the same OB-GYN for every child they birthed. They attended Open House and met with teachers who actually taught them in school. It seemed such a comfortable existence and something I yearned for. But as these 23 years have passed and with the help of social media, (now don’t get me started on that!)  I really am a stronger, braver and better person today thanks in part to this life I live as a Sports Spouse and all the people I have met along the way.

Here are my rules. Have fun.

The End of a Season

The end of a sports season in the NFL starts at the edge of the holiday season.